The Value Debate Over College Degrees

I recently attended the funeral of an Oklahoma relative, a man who valued education, was a long-time teacher, and was loved by his family and community (700 attended the funeral). When Bill was a child he went with his father to see a WPA soil conservation project on some nearby farmland. 30 men with shovels were toiling away and one man, without a shovel, seemingly did nothing. “Dad, why doesn’t that guy have a shovel?”, Bill asked. His dad answered, “Because he has a college degree.” That was the moment that Bill knew he wanted a college degree, too. And he got one at Oklahoma State (then Oklahoma A&M) and then used his Agricultural Education degree to get teaching jobs that gave him significant financial leverage to pursue the production agriculture operations that he loved.

Fast forward to 2017.  After the funeral, Bill’s son is showing me around his own ag operation, which he has built into a business capable of sustaining his lifestyle without the need for any additional income from sideline occupations. He stops to show me a track-hoe that he recently acquired, a behemoth of a dirt moving machine that he bought in an online auction. And, incredibly, he bought it for $9,000 (in a state of disrepair), then put another $3,000 and his own mechanical know-how into it, turning it into a machine that can easily outwork a thousand men with shovels. Ken has no college degree, no certifications, and no “badges.” What he does have is the experience he gained working as a John Deere mechanic when he was younger and the technology behind the invention of agricultural machinery, plus the technology to source that machinery efficiently. For Ken, technology and situational experience trumped a college degree. And while this is only one story, I see it replicated across the production agriculture spectrum (also admittedly small).

I will also add that Ken doesn’t think in these terms, it is my interpretation that I am presenting. He gives primary credit for his success to the support received from his family network, who all live nearby. In my view, that constitutes an additional factor that is rarely as significant for those who are engaged in the more traditional model of getting their children a college degree and then expecting them to move away from the family to wherever the most attractive job prospect arises. But in any case, the world has changed – in Bill’s day a college degree was a virtual guarantee for improving your station in life. Today, maybe not. 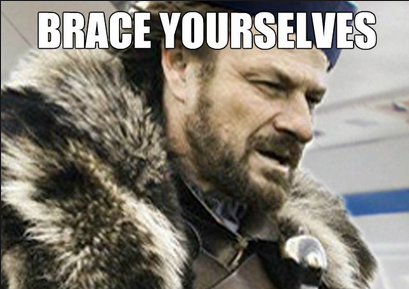 For those of you who haven’t traveled since the sixties, this is a seat-belt.

If you’re traveling with children please put your own oxygen mask on first, then put one on the child with the most potential.

All carry-ons have to be stowed in the overhead bin or under the seat in front of you. And if it didn’t walk on, it’s a carry-on.

We don’t expect a drop in cabin pressure. If we did, we wouldn’t have shown up for work today.

Please take care when opening the overhead bins. If something falls on your head it creates way too much paperwork.

It’s a $2,200 fine for smoking in the lavatory and if you wanted to spend that kind of money, you would have flown American. 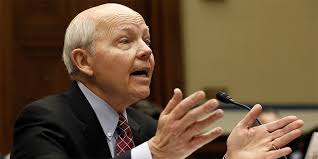 The IRS is scheduled to announce a design contest for making interactions with their agency easier, and they are offering $10,000 to the winner. $10.000? This doesn’t really advance the idea of the IRS being in touch with reality. In the entrepreneurial world, $100k seems to be some kind of informal threshold for anyone who is serious about incentivizing results.  Even the smallish city of Amarillo, Texas pays out half a million in grants every year to promising new businesses. And ff you don’t want to go to the trouble of actually doing anything, Wells Fargo offers $25,000 just for “telling your story”.  Sorry to say it, but $10,000 is a joke.

To make it even more embarrassing, the prize money is being provided by the Mortgage Bankers Association for the purpose of making life easier and more profitable for their members. They are reported to be looking for a way to automate how tax returns are provided to lenders. If the size of this prize is any indication, the MBA isn’t very committed to the concept.

Recently updated my United account and was a little overwhelmed by the security questions. I have to answer and remember FIVE security questions from THIS set? Not to worry, United has thoughtfully provided answers to choose from, so if your favorite artist happens to be Ibrahim El-Salahi or Katsushika Hokusai, all you have to do is remember how to correctly spell the name when that question prevents you from logging on 6 months from now. These are friendly skies? 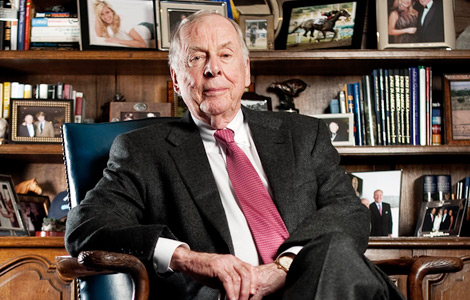 Several years ago I became interested in buying the Herring Hotel in Amarillo with the idea of turning it into condos and temporary executive housing. The Herring was a historic, but neglected property which had been purchased out of bankruptcy for $15,000 by a California investor who was trying to flip it for a big gain. My entrepreneurial spirit surfaced and I could see transforming it into something profitable, as well as something good for civic development. I was living on my ranch at the time, but had a social friendship with Liz Pickens who said, “Why don’t you talk to my dad about it?” So I called Boone and he said, “Sure, come on in, we can have lunch and discuss it.”

A love for the game

At the time, he was flying high with Mesa Petroleum, the Amarillo exploration company that initially made him rich and famous. He was the highest paid executive in America, a media darling, and had just hit upon a simple business model that would really define him going forward – find an oil company whose assets were worth more than their market capitalization, then just buy all the stock and sell all the assets. If a company had a market capitalization of $50 million but the assets were worth $70 million, you just buy all the stock for 50 then sell off the assets for 70 and, presto, you just made $20 million. He took a lot of heat from people who thought a company shouldn’t be destroyed that way, but they were normally the people who had a comfortable position within that company. His logic, in my opinion, was fairly unassailable.

I remember sitting at his breakfast table one morning right after he had banked about $50 million on his Gulf Oil deal. (The group he led made over $700 million.) He described how it unfolded: “Our lawyers told us that after we launched our takeover bid, we might have 2 weeks before they mounted an effective counter strategy. 2 weeks went by, then 4 weeks, then 6 – they never came up with a counter strategy.” This was the kind of thing which just reinforced his publicly stated views that most American CEOs were lazy, entitled incompetents who should either “get to work” or be replaced.

So anyway, I had this lunch meeting set and was expecting a quick restaurant trip, but Boone had a different idea. When I got to Mesa headquarters he took me into the boardroom where his assistant had laid out a lunch for not only the two of us, but all his top lieutenants who he had asked to sit in and listen to my idea. (Except for David Batchelder, who never fit the Mesa mold and decamped for La Jolla early on).

Boone made introductions and then had me describe my idea to the group. At the time, Amarillo was home to several NYSE companies and I thought there was a market for corporate lodging downtown near the headquarters buildings. A company like Mesa, which brought in a lot of out of town visitors could logically take advantage of putting them up in a nice and convenient location. And if Pickens signed on to the concept first, I figured the others would be a cinch. So after I finished describing my vision, his guys (and they were all guys) weighed in, one by one, with their opinions about the concept and the chances for success. All in all, the feedback was pretty negative. Boone had a negative opinion about the property from the get-go, and his executives didn’t think there was enough market demand to make it profitable.

As soon as lunch was over, Boone ended the meeting and ushered me out, saying, “See, I just saved you a lot of money…..and you owe me lunch.”

Unfortunately for Amarillo, the Herring Hotel still stands as a shell in downtown with little prospect of being rescued. Boone subsequently lost control of Mesa Petroleum, but quickly founded BP Capital where he made $4 billion, of which he says he has “lost $2 billion, gave away $1 billion, and still have $1 billion.” He is still making deals and I still owe him lunch.
Posted in accelerators, Angel capital, Angel Investors, Business, capital, crowdfunding, equity, financing, incubator, incubators, innovation, investors, loans, startup, startups, Uncategorized | Tagged Amarillo, Boone Pickens, Herring Hotel | 2 Comments

Why the 1202 tax preference isn’t that great

The recent tax bill is amazing in the ways that have been dreamed up to “nudge” society’s behavior. A few (and I mean only a few) of the more interesting items that were passed: 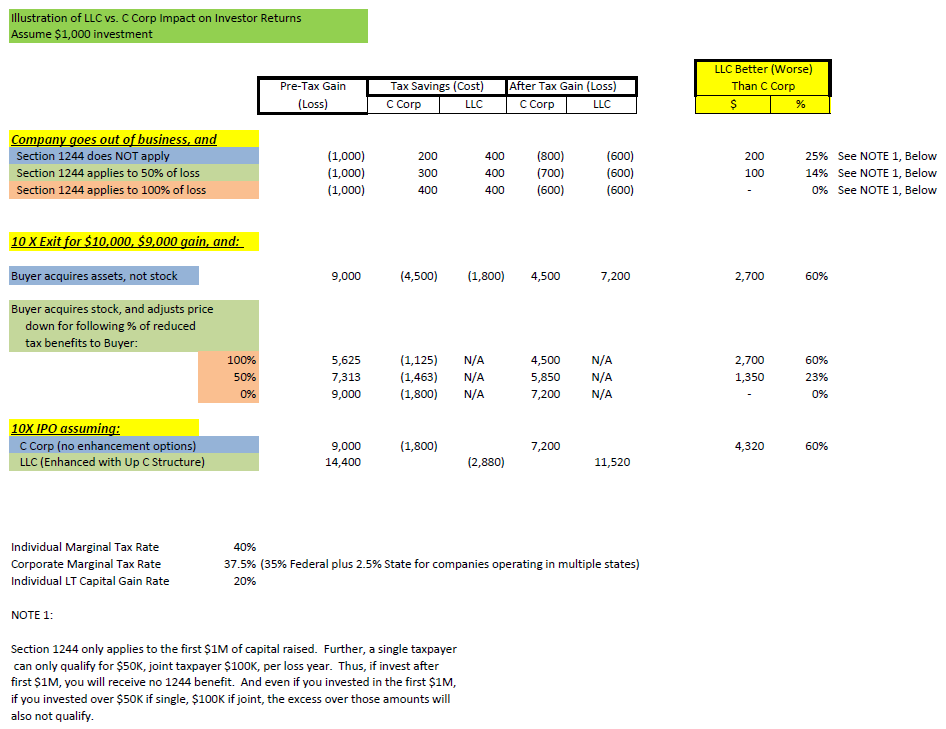 According to the Federal Reserve Bank of Dallas, this is the average savings per family from the cheaper gasoline prices which are expected to hold for 2016.

I’m a little fuzzy on the argument for why lower oil prices are supposed to be bad for the economy. No question that it hits the oil industry in their bottom line, but doesn’t it also reduce the cost of operation of most businesses and lower the cost of living for individuals? I can’t remember ever having personally benefited from high oil prices.

See all 10 projects in this Inc. story if you don’t mind putting up with their intrusive website.